WHO IN THEIR RIGHT MIND COULD THINK OF FISH FOOD AS PETS?

None other than the man who invented X-ray Spex, Crazy Crabs, Invisible Goldfish, and Hair-Raising Monsters — all iconic 20th Century novelties. Born in 1926 and raised in New York City, Harold von Braunhut began his career as a budding magician and inventor while still in high school and worked on the first GPS system — the Directomat — for the NYC subway system in the 1950s. A taste for adventure and the bounds of human experience, he also raced motorcycles as the Green Hornet and managed the careers of a man who jumped 40 feet from the Flatiron building into a shallow kiddie-pool (Henri LeMothe) and one of the most famous mind readers of the 20th century (The Amazing Dunninger). But the Amazing Live Sea Monkeys® were Harold’s most enduring and iconic invention. Walking into a pet store in 1957, he saw a tank of overlooked brine shrimp that were used as fish food and in a flash saw an instant pet that could teach children about the oddities of nature. He began experimenting on how to preserve and reanimate them in his tiny lab, and in 1960 introduced them to the world as “Instant Life.”

And Sea-Monkeys® indeed exhibit instant life. How they come to life, however, is a highly guarded, patented secret interplay of osmosis, controlled pH fluctuation and chemical formulations. The “Original” formula is kept under lock and key, and still made in the USA to this day. Originally Sea-Monkeys® didn’t sell at all. It wasn’t that no one was buying them, it was that no one wanted to sell them, so Harold got the idea to place an ad for ‘Instant Life’ inside comic books to market directly to kids. Sea Monkeys® could be ordered by mail directly from the Sea Monkey® headquarters. Overnight, orders were flying in and the Sea Monkeys® began their long career striking the imaginations of millions of children.

From Shrimp to Sea Monkeys

Enticed by those ads in the back of comic books, generations of children from around the world have grown up nurturing, naming, and staring wide-eyed in fascination at the little creatures whose resemblance to monkeys does require a little imagination. It wasn’t until Harold noticed the little shrimps’ tails that he came up with the decade-spanning, iconic moniker. “I looked at these animals and they’re the cutest things in the world and I noticed they have little monkey-like tails,” Harold said in an interview. “Those are cute little sea monkeys®.’ So we checked the trademark register with my patent attorney, and he says, ‘Hey there are no sea monkeys.’ That was in 1964.” The very first Sea Monkey® artists , were Henri La Mothe and Brice Belisle. Later on, Harold enlisted artists, Ben Harvey and DC comics, Joe Orlando, to help children visualize their Sea Monkeys® as magical beings, looking like cute little monkeys, with fish like bodies and crown like heads. 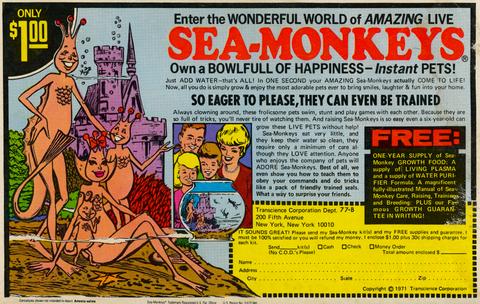 By then, Harold, who had been laughed out of toy showrooms with his crazy Sea Monkeys® idea, was doing well with his comic-book marketing. But he was still having a little trouble with the Sea Monkeys® longevity. It was rare that the little fellas lived to see the end of their first month, and consumers were getting frustrated. Harold wanted to create “super Sea Monkeys®” out of the brine shrimp, whose eggs can lie dormant in salt flats with the spark of life intact awaiting the right conditions. Teaming up with marine biologist Anthony D’Agostino at the New York Ocean Science laboratory in Montauk, Harold mastered the instant life process and created “super” Sea Monkeys® (Artemia NYOS) out of common brine shrimp (Artemia Salina). Two refinements, in 1970 and then again in 1995, resulted in a larger and hardier Sea-Monkeys® that can live up to two years.

Over the years, Sea Monkeys® have become family pets in millions of homes and become part of American and the Worlds popular culture. In 1998, 400 million of them went into space with astronaut John Glenn. They had their own Saturday morning series on CBS in the 90s, and have appeared in countless TV shows and movies, from South Park to The Simpsons to The Secret Life of Pets. There are internet forums where thousands of fans talk and debate all things Sea Monkey®. Over the decades they have broken out of their modest aquariums and ended up in wrist watches and necklace pendants and Sea monkey® race tracks. In whatever form, at core the Sea Monkeys® delight in appearing to come alive before your eyes and unleashing the imaginations of their owners.

A model and and actress in many 1960s-era independent films, Yolanda is now putting most of the proceeds from Sea Monkeys® into a nature preserve that she and Harold created in Maryland. An ardent vegan and animal rights activist, Yolanda believes in the interconnection between all life forms. Yolanda is truly the guardian and mother of the Sea-Monkeys®.

To get updates on the forthcoming Sea Monkeys® feature documentary, Please Click Here